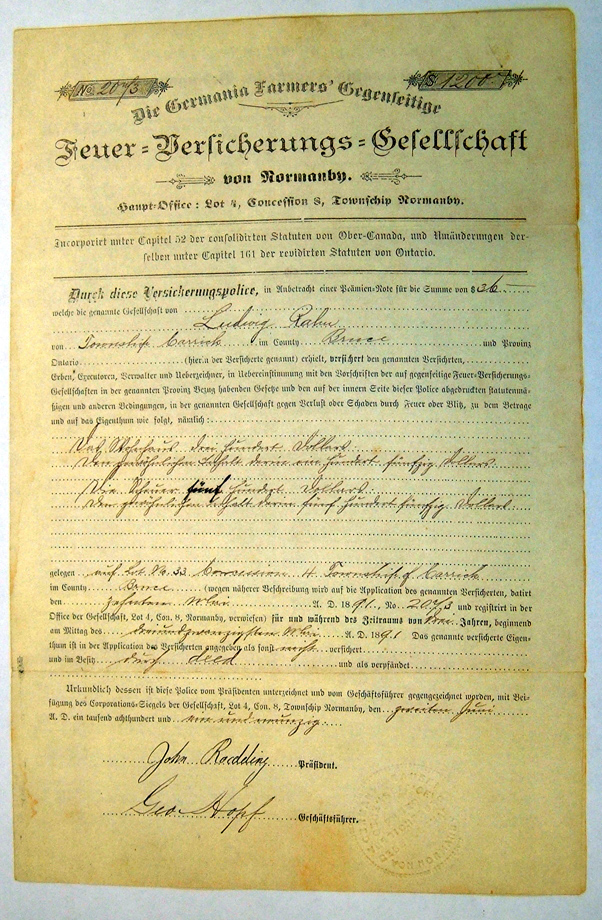 Above is a policy issued by Germania Farmers’ Mutual in 1891.

Incorporated in February of 1878, with the first policy being written in March of 1878.

Back in the 1800’s insurance was difficult, if not impossible for farmers to purchase.

As a result, local farmers got together to form a company that would meet their insurance needs. In those days, each member would sign a “premium note” which showed how much insurance you had and was also the way the company would collect money for the claims it paid out. If there were a claim, each member would be assessed so much money to pay for that claim. The premiums of the many paid for the losses of the few. Later on, some premium was collected ahead of time. If the amount they collected was too much, at the end of the year it would be returned to you. If it was a bad year for claims, the company might need to come back and collect more funds. All members participated in the results for the year.

Premium notes were no longer necessary by the 70’s when the farm mutual’s also formed the Fire Mutual’s Guarantee Fund. This was an agreement by the members to financially guarantee that if any company should get into financial difficulty, then all of the member companies would back that company financially to ensure that the policyholders were protected.

In 1977 windstorm, livestock and machinery floaters and liability coverage became available for the farm properties.

In 2000 the company commenced with writing private passenger automobile insurance.

In 2002 the Germania Mutual wrote just under $6 million in premium, with $5 Million in Surplus and services over 7500 member customers.